Behind the Beautiful Forevers by Katherine Boo

In this breathtaking book by Pulitzer Prize winner Katherine Boo, a bewildering age of global change and inequality is made human through the dramatic story of families striving toward a better life in Annawadi, a makeshift settlement in the shadow of luxury hotels near the Mumbai airport.

With intelligence, humor, and deep insight into what connects people to one another in an era of tumultuous change, Behind the Beautiful Forevers, based on years of uncompromising reporting, carries the reader headlong into one of the twenty-first century’s hidden worlds—and into the hearts of families impossible to forget.

Ruth Reichl is a born storyteller. Through her restaurant reviews, where she celebrated the pleasures of a well-made meal, and her bestselling memoirs that address our universal feelings of love and loss, Reichl has achieved a special place in the hearts of hundreds of thousands of readers. Now, with this magical debut novel, she has created a sumptuous, wholly realized world that will enchant you.

Billie Breslin has traveled far from her home in California to take a job at Delicious!, New York’s most iconic food magazine. Away from her family, particularly her older sister, Genie, Billie feels like a fish out of water—until she is welcomed by the magazine’s colorful staff. She is also seduced by the vibrant downtown food scene, especially by Fontanari’s, the famous Italian food shop where she works on weekends. Then Delicious! is abruptly shut down, but Billie agrees to stay on in the empty office, maintaining the hotline for reader complaints in order to pay her bills.

To Billie’s surprise, the lonely job becomes the portal to a miraculous discovery. In a hidden room in the magazine’s library, Billie finds a cache of letters written during World War II by Lulu Swan, a plucky twelve-year-old, to the legendary chef James Beard. Lulu’s letters provide Billie with a richer understanding of history, and a feeling of deep connection to the young writer whose courage in the face of hardship inspires Billie to comes to terms with her fears, her big sister and her ability to open her heart to love.

From New York Times bestselling author William Kent Krueger, a brilliant new novel about a young man, a small town, and murder in the summer of 1961.

“That was it. That was all of it. A grace so ordinary there was no reason at all to remember it. Yet I have never across the forty years since it was spoken forgotten a single word.”

New Bremen, Minnesota, 1961. The Twins were playing their debut season, ice-cold root beers were selling out at the soda counter of Halderson’s Drugstore, and Hot Stuff comic books were a mainstay on every barbershop magazine rack. It was a time of innocence and hope for a country with a new, young president. But for thirteen-year-old Frank Drum it was a grim summer in which death visited frequently and assumed many forms. Accident. Nature. Suicide. Murder.

Frank begins the season preoccupied with the concerns of any teenage boy, but when tragedy unexpectedly strikes his family—which includes his Methodist minister father; his passionate, artistic mother; Juilliard-bound older sister; and wise-beyond-his-years kid brother—he finds himself thrust into an adult world full of secrets, lies, adultery, and betrayal, suddenly called upon to demonstrate a maturity and gumption beyond his years.

Told from Frank’s perspective forty years after that fateful summer, Ordinary Grace is a brilliantly moving account of a boy standing at the door of his young manhood, trying to understand a world that seems to be falling apart around him. It is an unforgettable novel about discovering the terrible price of wisdom and the enduring grace of God.

The circus arrives without warning. No announcements precede it. It is simply there, when yesterday it was not. Within the black-and-white striped canvas tents is an utterly unique experience full of breathtaking amazements. It is called Le Cirque des Rêves, and it is only open at night.

But behind the scenes, a fierce competition is underway—a duel between two young magicians... this is a game in which only one can be left standing, and the circus is but the stage for a remarkable battle of imagination and will. Despite themselves, however, Celia and Marco tumble headfirst into love—a deep, magical love that makes the lights flicker and the room grow warm whenever they so much as brush hands.

True love or not, the game must play out, and the fates of everyone involved. 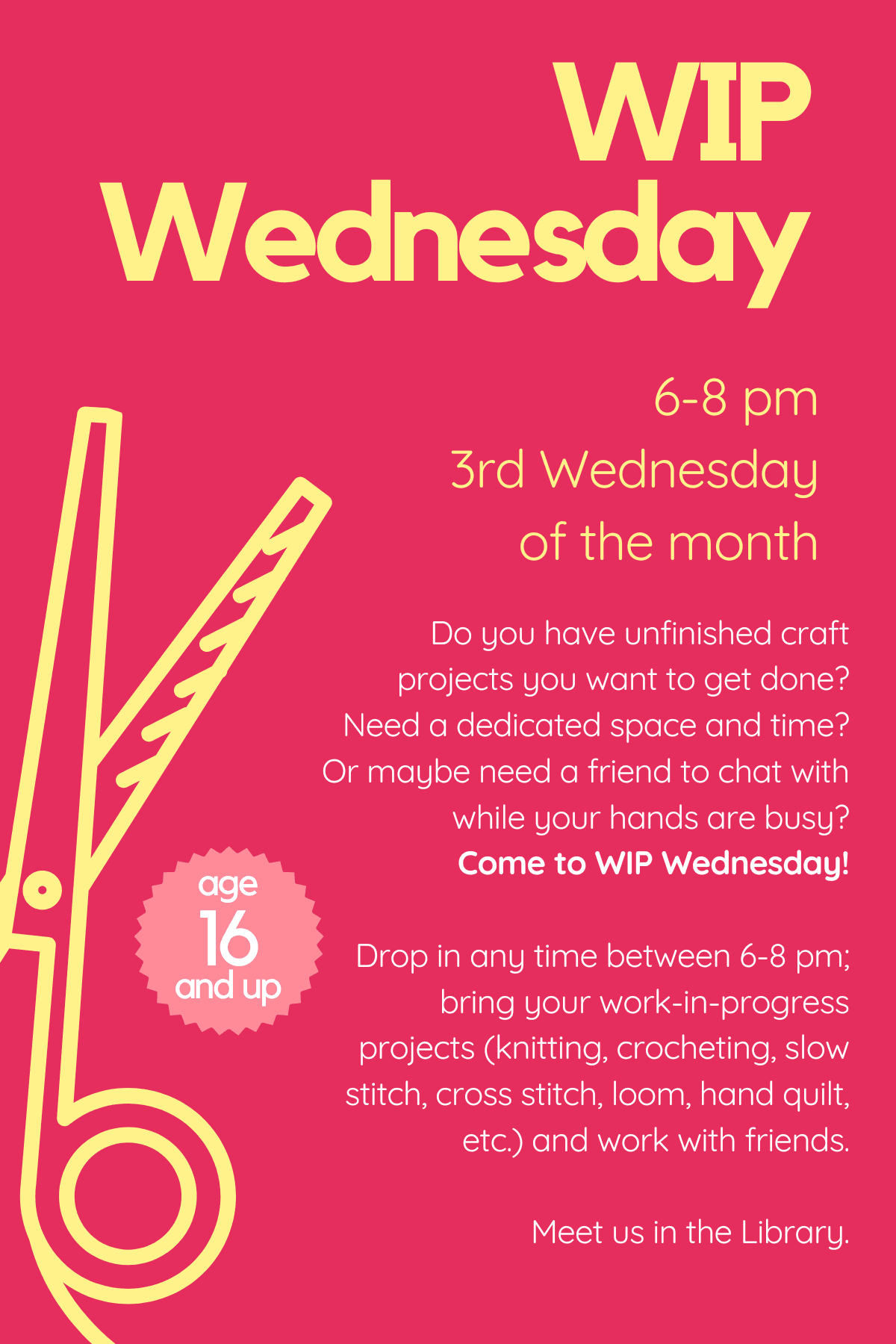 Do you have unfinished craft projects you want to get done?

Need a dedicated space and time?

Or maybe need a friend to chat with while your hands are busy?

Drop in any time between 6-8 pm; bring your work-in-progress

Meet us upstairs in the council chambers; follow signage. 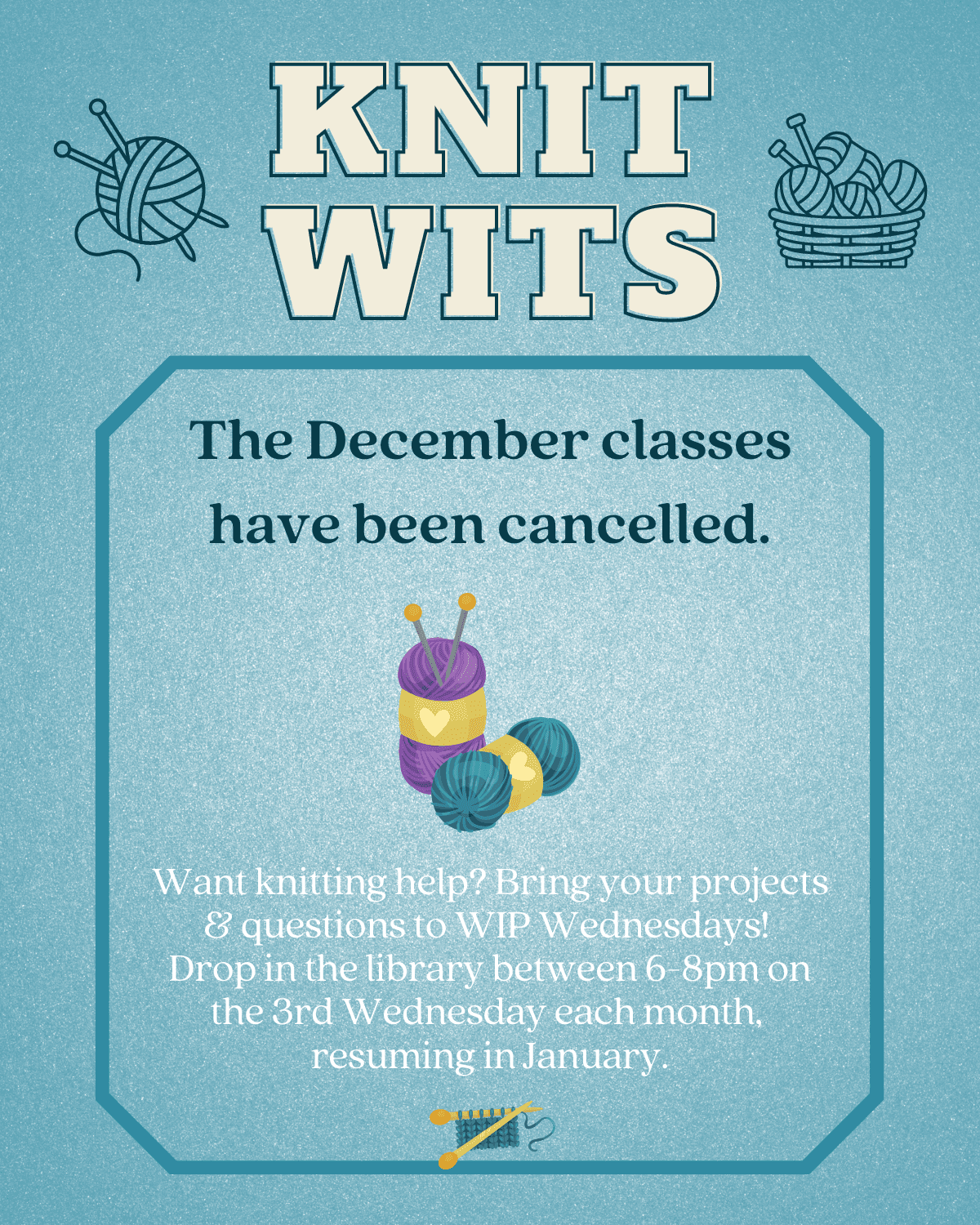